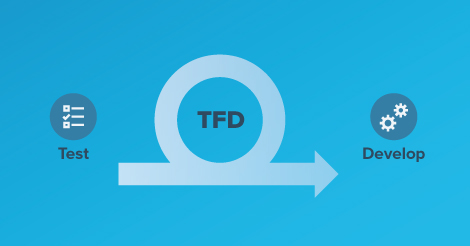 Test-First development or TDD is a built-in quality method used in Extreme Programming methodology where developers write the unit tests before writing the production code. So, instead of the conventional practice of writing tests after the fact, you start your work with a unit test.

This is design thinking in effect. The test-first approach gives you an outside-in perspective. Such that you build and run focused tests specifies and validates the code’s purpose. Ideally, you do this for every single, cohesive function in the production code.

Creating smaller chunks of unit test-first enables programmers to analyze the need more closely. There is nothing like a good unit test to nail down the exact requirements. There is no possibility of misunderstanding the specs written as an executable code.

Typically, the practice is to use one of the xUnit frameworks for automated unit tests. Frameworks like Junit, NUnit etc have indeed made it quite easy to create, run and manage vast suites of unit tests.

Here are some of the other benefits of the Test First Development Approach:

Immediate feedback: By testing early and thoroughly, you are more certain of the overall behavior of the system. Creating several dozens of unit tests that check specific functions, you raise the overall quality and reduce the number of defects throughout the quality lifecycle.

The Whole and the Sum of its Parts: The habit of getting the small, incremental gains in testing bite-size chunks gives you a view that goes from micro to macro real quick when piece things together. Ultimately, the overall code quality is much better as a result of the nit-picking and foresight.

Keeps the process agile: Test-First Development follows the Agile principles by and large and keeps things moving. With scope creep and feature creep, it is often difficult to keep things nimble. But with Test-First Programming you already have your set of good, validated unit tests in place. You can refactor safely and be notified of significant changes quickly.

Overall testability of the code: Often when you write tests after implementing some functionality, you gather that it is quite hard to test. This requires you to make some changes to make it better.
The advantage with Test-First Development is that you have to think about the contract of the interface and the testability of the component, way before implementation. This way you always create more testable code. It helps you structure objects and separate the concerns that follow the logic of your unit tests.

Is there a difference between Test-First Programming and Test-Driven Development?

While largely similar, there is one key difference between Test First Development and Test Driven Development. In TDD, it is the tests that drive the design.
TDD has an additional step to the Test-first process. This is to refactor the code and design to simplify as much as possible and remove all possible duplication.